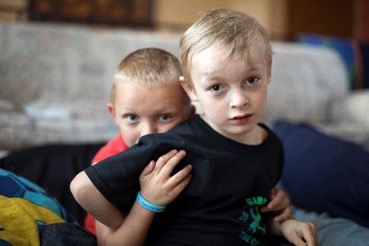 Riley was a 10-year-old boy who had a rare, genetically-driven disease known as pantothenate kinase-associated neurodegeneration or PKAN. Sadly, Riley died recently. We spoke with Riley’s family, and we agreed that we would continue to use Riley’s photo to honor his memory, to educate the community about PKAN, to continue to inspire the CoA team, and to remind the world of the urgent need to develop a treatment for PKAN. We share Riley’s story below with the greatest respect for his family and all families living with PKAN.

PKAN is a nervous system disorder rooted in an error in the PANK2 gene. This gene mutation causes a metabolic deficiency that leads to progressive difficulty with movement, usually beginning in childhood.

Riley was diagnosed with PKAN when he was 3 years old, after failing to meet many developmental milestones. As with many PKAN patients, his condition was confirmed through an MRI scan, which showed iron had accumulated in part of the brain known as the basal ganglia which lie deep within the cerebral hemispheres and are responsible for motor control and many other important functions.

After his diagnosis, Riley’s condition steadily worsened. As a small child, he had been able to walk independently, despite muscle contractions known as dystonia which caused him pain and to fall frequently. At age six, he could no longer walk.

Riley experienced similar setbacks in his speech. While his speaking abilities were always severely limited due to the disease, he lost all ability to talk as his PKAN progressed.
PKAN has a major impact not just on the child with the diagnosis, but on the whole family. Erin, Riley’s mother, was his primary caregiver, with lots of help from his younger brother, Mason, and his grandmother, Janis. Few things made Riley as happy as the moment when Mason returned home from school – when Mason would burst through the door and rush to hug his big brother, Riley would flash a big smile.

With Erin and her family, we deeply mourn the loss of Riley. Together with the entire PKAN community, we hope that one day soon there will be a treatment that improves the quality of life for children with PKAN and treats the challenging aspects of this very difficult disease.